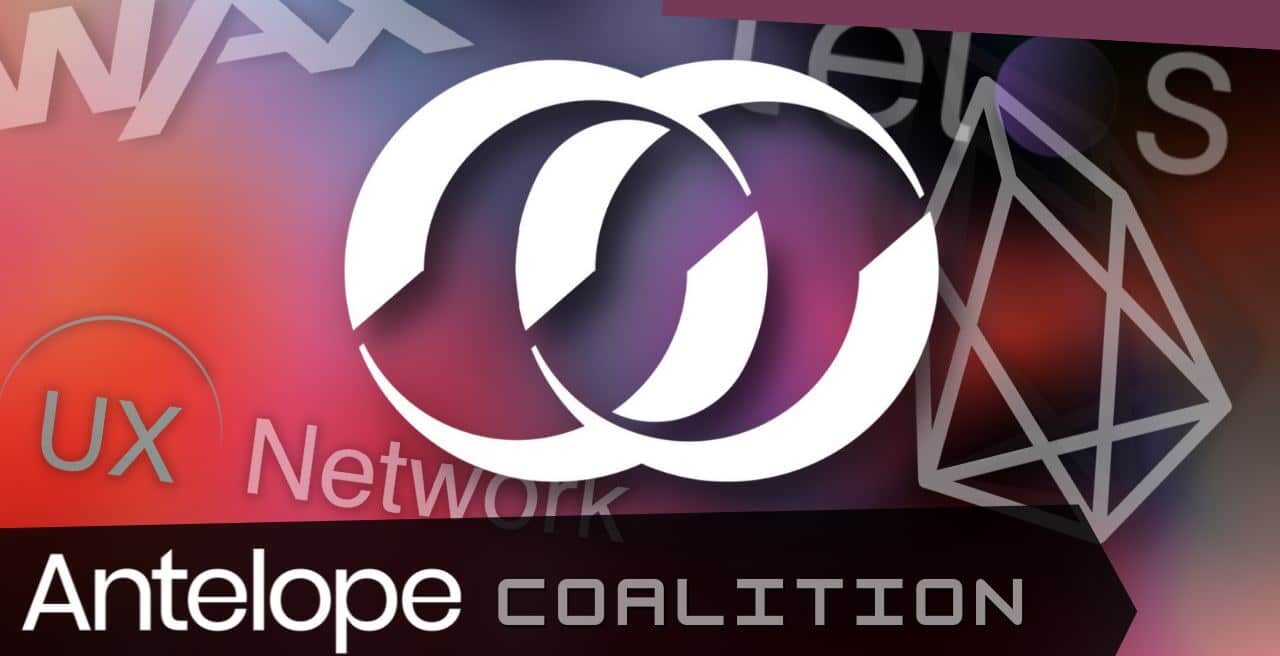 The Antelope Coalition features members of the EOS, WAX, Telos, and UX public blockchains, which pool their resources to work on a shared codebase. Each week, stakeholders join in a meeting to provide updates and requirements for new initiatives on the Antelope software stack.

This week, the conversation flowed around a grab-bag of topics, such as hardware wallet support, a secure smart contract library, IBC, Instant Finality, client-side SDKs, developer onboarding, and adding new chains to the Coalition.

The Coalition has identified hardware wallet support, including Ledger and Trezor wallets, as a major priority for the working group. Because of the sophisticated permissions system on Antelope, users can protect their crypto using hardware wallets without requiring its use for smaller transactions. Integration with the most popular hardware wallets is necessary to enable average users to exercise best practices while storing their blockchain assets.

Aaron from Greymass has reached out to Ledger on their discord but still awaits a response. Ted from ENF will ping Eric about initiating a conversation with the Ledger support team to help push the conversation forward. Lucas will also contact Trezor hardware wallet support to establish a working relationship.

Adding New Chains to the Coalition

The Antelope coalition formed with four founding chains: EOS, WAX, Telos, and UX. These chains formed a consensus around a shared treasury that allowed all chains to contribute significantly without putting undue price pressure on the smaller-cap chains. The Antelope Coalition used this funding for research, software development, and other initiatives.

Other chains have seen the success of Antelope and have expressed interest in joining the Coalition. Current members have discussed this in the past and are open to it with a consensus of members, but they need to consider how the new chains fit in the Coalition funding. To coordinate further conversation, Jeff sent out a meeting invitation to Yves. However, all of Yves’s slots were full. Jeff will resend the invitation to Yves with new dates.

The Coalition also settled on an additional period of group dialogue Mondays at 11 AM PST as a dedicated time to discuss specific agenda items before the weekly Antelope Coalition working group meetings.

Re-Prioritization of Top Items for the Coalition

The Coalition ranked their top priorities for development in the past, but new information has led to a re-prioritization. In particular, the bid for a rewrite of the P2P protocol was too high, and the building duration was too long. A Chinese university offered a bid for the RFP to compete with OCI’s bid, opening up the possibility of negotiation. Still, the Coalition split the Request For Proposal (RFP) in half to narrow the scope and scale of each RFP.

An RFP draft for the first half is available on the Coalition’s core Telegram group. Each chain will review the RFP, and the Coalition will hold a formal vote next Thursday.

The Secure Smart Contract library is a repository of boilerplate contracts that developers can use to assemble their contracts on Antelope. Douglas of GoodBlock is helping manage the project and will review the Master branch with Denis from EOS Nation. They intend to review milestones and provide feedback next week on Nov 3rd, and Douglas will provide asynchronous feedback.

The Coalition supports bringing developers into the Antelope ecosystem with outreach and developer workshops. This initiative is still in the pipeline, and the next stage begins when OCI meets with Ted and Guillaume on Thursday, Nov 3rd.

Instant Finality and Inter-Blockchain Communication (IBC) are priorities for the Coalition, and progress is on track. Bucky is now assigned to review the IBC contracts to alleviate the resource crunch.

The 0rigin team achieved Milestone #1, and the code is ready for review. This milestone encompasses IBC governance, and Bucky needs to review the milestone before releasing it to Mainnet.

Milestones #4 and #5 are related to Instant Finality, and both are ready for review. A full, functional implementation of IBC requires these milestones.

Greymass has been working on the Web Client Software Development Kit (SDK) to help allow developers to integrate the Antelope stack into their applications. Greymass developer Aaron released a scheduling poll in the core channel for a new weekly review meeting.

The Antelope Coalition needs additional branding deliverables to achieve mindshare effectively. These brand milestones are close to completion, possibly by the next meeting.

The Document Antelope workgroup is currently on hold so the team can focus on software development priorities.

Antelope is an open framework for building next-generation web3 products and services. Its community-run codebase is behind some of the fastest, most secure, and user-friendly blockchains, reliably fulfilling millions of daily transactions with its innovative DPoS algorithm. Developers and businesses worldwide use Antelope for a diverse range of applications, from DeFi and supply chain management through to NFTs and games.

The EOS Network is a 3rd generation blockchain platform powered by the EOS VM, a low-latency, highly performant, and extensible WebAssembly engine for deterministic execution of near feeless transactions; purpose-built for enabling optimal web3 user and developer experiences. EOS is the flagship blockchain and financial center of the Antelope protocol, serving as the driving force behind multi-chain collaboration and public goods funding for tools and infrastructure through the EOS Network Foundation (ENF).

The EOS Network Foundation (ENF) is a not-for-profit organization that coordinates financial and non-financial support to encourage the growth and development of the EOS Network. The ENF is the hub of the EOS Network, harnessing the power of decentralization as a force for positive global change to chart a coordinated future for EOS.

EVMxIdeathon: Dream It, Build It!

EVMxIdeathon: Dream It, Build It!

The only source for EOS news you'll ever need

Sign up today to stay informed and join the EOS community!

Yves La Rose is the Executive Director and Founder of the EOS Network Foundation (ENF). A consummate consensus builder within the EOS ecosystem, he lives and breathes EOS, working to ensure the success of the network.

At a young age, Yves was attracted to technology. Through the experience of building his first computer and writing his first program at the age of seven, a lifelong interest in the potential of technology was born.

After completing studies in psychology at the University of Ottawa, Yves moved to Japan where he began his professional career in business and education.

With an entrepreneurial and inquisitive nature, six years passed, living and working while steeped in Japanese language and culture. At the same time, his early intrigue with technology was being further amplified by the revelations of Bitcoin. In 2010, he began mining Bitcoin on his laptop, and exploring the potential of decentralized networks.

Returning to Ottawa in 2011, Yves resumed his university education in pure sciences, focusing on perceptual and computational neuropsychology, and additional studies in behavioral economics.

In 2017, with additional years of business planning and analysis experience, Yves began seriously considering an endeavor in the emerging blockchain industry.  Along with a handful of interested associates, he formed a blockchain book club, and having made a thorough survey of second and third generation blockchains, they began focusing their attention on the promising open source blockchain platform, EOSIO.

In February of 2018 Yves co-founded EOS Nation and led it to become the top rated block producer on the largest and most valuable network using EOSIO, the EOS Mainnet.

For over three years as founder and CEO of EOS Nation, Yves helped navigate the company through a great deal of operational uncertainty. Running network infrastructure, providing community outreach, exploring governance models, and contemplating approaches to public goods funding. His undivided attention was on EOS.

EOSIO was at the bleeding edge of public blockchain development, but it was also a global, decentralized network that was increasingly hobbled by distant and ambiguous leadership, misallocation of capital, and misalignment of incentives. Various teams sought to create a foundation, or a worker proposal system that could fund the development of public goods for the network, but these efforts stalled, and EOS was adrift. In May of 2021 Yves resigned as CEO of EOS Nation and began to contemplate a new path forward.

Throughout his tenure as CEO of EOS Nation, Yves had formed many good relationships across the EOS Network, among BP’s in the East, West & in the global South. Yves recognized that he was uniquely positioned to coalesce the stakeholders of the EOS Network around a foundation that would work on behalf of all EOS token holders to realize the true potential of EOS.  With the assurance of support from a coalition of stakeholders, Yves founded the EOS Network Foundation.

Since founding the ENF, Yves has dedicated himself with singular focus, in the spirit of a modern day samurai, to work for the benefit of the EOS public blockchain and the many stakeholders of which it is composed.  Yves continues to cultivate a team at the ENF that can serve the needs of the EOS community by lifting up and empowering the community itself.

Grounded in the lived experience of Eastern thought and traditions from his time living and studying in Japan and traveling throughout Asia, Yves brings a holistic approach to unifying the global EOS community through mutual respect, and a willingness to meet others wherever they are at.

Please share your thoughts in the form below, and we’ll respond within 48 hours of receiving the inquiry.